The following article was taken from Aljazeera America about lobsterman Gary Nichols and his daughter in the Florida Keys. Check out the original article here. 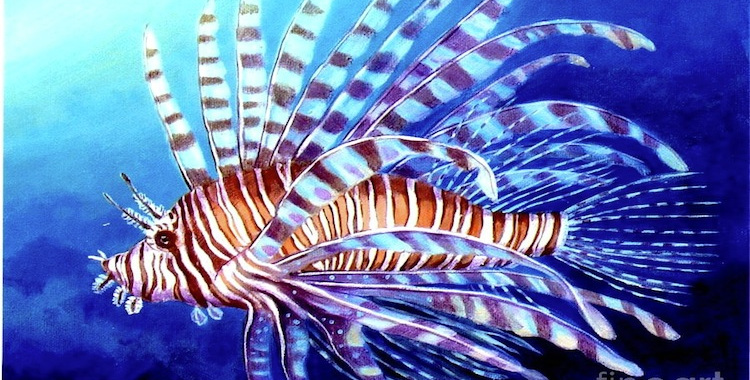 Last month five marine scientists boarded the Antipodes, a submersible off the coast of Fort Lauderdale, Fla., with an unusual two-day mission: to look for evidence of the spread of reef-destroying exotic lionfish in deep waters.

Out in the depths of the ocean they found something shocking. Lionfish had surrounded the Bill Boyd sunken cargo ship, which sat on the sandy bottom, about 250 feet down.

It was bad news for the scientists. The population of the invasive fish, which causes immense damage to native reefs, was clearly booming. Even worse, the fish were clearly still expanding their range, happily roaming far from their usual habitats of reefs, wrecks and rocks.

“Lionfish are very structure-associated fish, but it was very unusual to see single fish swimming in open waters at the bottom of the ocean,” said David Kerstetter, a research scientist from Nova Southeastern University Oceanographic Center.

The species is a huge problem. After being first reported off Florida’s Atlantic coast in the mid-1980s, the lionfish blanketed the Caribbean and spread from the Florida Keys to North Carolina’s Cape Hatteras in less than a decade. They gobble up all the juvenile fish in their path, which eventually results in the breakdown of the coral-reef ecosystem.

The ferocious-looking, red-striped fish — which is a formidable hunter equipped with a dramatic array of venomous spines — has an insatiable appetite and can reproduce very quickly, with females producing up to 30,000 eggs three times a month. It does not help that these fish also had no known predators in Florida’s waters.

Meet the Nichols family. For years, commercial fisherman Gary Nichols Jr. and his 29-year-old daughter Kelly earned their living dropping 3,000 lobster traps over a 40-mile-wide patch of the Atlantic. But now, in a remarkable turn of events, they have turned their hands to catching lionfish instead.

They noticed the first lionfish in their traps four years ago, and it has not been the same since. They watched helplessly as the number of lionfish in their pots swelled and the number of lobsters diminished. But then Nichols made a bold decision — one that would keep his business afloat, help the delicate environment of the Florida coast and fill the bellies of hungry locals and tourists alike.

Nichols would create a lionfish market by himself, from the incidental catch of his lobster traps. He would sell the fish to local restaurants. So instead of tossing them or lamenting his lost lobsters, Nichols caught them, kept them and started selling them.

The biggest hurdle, Nichols said, was negotiating a good wholesale price. He had to convince restaurant owners that lionfish could be a desirable specialty item. To do that, he filled his truck with buckets of lionfish and visited every restaurant in his area.

“I showed the chefs how to fillet them and fried them up on the spot,” Nichols said. “They don’t yield a great amount of meat, but they’re delicious.

It worked. The light, buttery flavor of the meat is considered a delicacy, and soon the demand for the fish far exceeded what he was able to catch. And there was another silver lining: The wholesale price was comparable with lobster’s, even getting a better price at times than grouper’s.

Others are also getting into the thorny world of harvesting lionfish for consumption. The Reef Environmental Education Foundation has released “The Lionfish Cookbook,” and the operators of Minnesota-based Traditional Fisheries, David Johnson and Gary Groomes, made their case before 6 million viewers on ABC’s reality competition TV show “Shark Tank.” Although they couldn’t persuade four celebrity investors to bite, their business is expanding. Johnson told Al Jazeera the company has more than 70 high-end restaurants across the country buying the lionfish they package and ship from fisheries in the Caribbean. But this is still a part-time job for Johnson and his partner. For Nichols, it has become much more significant.

But no one should think it is easy work. The lionfish’s spines are painful and poisonous.

“I think some people thought I was crazy, because most guys toss the fish,” Nichols said. “If you’re not careful, it’s easy to get stuck, and one stick feels like a thousand scorpion bites at once.”

Nichols — who sports a booming voice, weathered skin, a graying goatee and raccoon-like tanlines around his eyes, where sunglasses sit for hours on end — has been stuck so many times handling the fish that he has developed an immunity. The swelling doesn’t last as long as it once did, but he describes the pain as if his blood were boiling inside the limb, which is swollen and taut to an extreme. There’s no antidote, and victims mostly have to wait it out. Last season he spent more than $8,000 on emergency care for his mates, and he said one nearly died when his heart stopped. Fortunately, Nichols got the man off the boat and to an emergency room just in time.

“If I were allowed to carry a shot of epinephrine, I would, but you have to have a license for that,” Nichols said. “Right now I have my own remedy, which is two hits of Benadryl, and I double up on Aleve.”

But for the Nichols family, the pain and risk has been worth it. Hunting lionfish has allowed them to keep doing what they love: fishing off the Florida coast.

Kelly Nichols, a petite, sun-burned blonde, grew up fishing on her father’s boat. She is known around the Keys as the first and youngest female commercial lobster captain, having done the job full time since the age of 18 — something her father didn’t encourage. She admits it has never been for the weak.

“It’s butt-busting work,” she said. “I’m not going to kid you. When these traps are wet, they weigh 150 pounds, and we stack them four or five high on deck. But looking at orange sunsets or sunrises, watching dolphin jump on a beautiful day — there’s nothing like it.”

She said the extra work has been worth it. Two years ago, she was married and her husband was unable to work after a fishing accident left him with back and wrist injuries. Now she’s divorced, with a 5-year-old son. The lionfish made up for the declining lobster catch. Without that and her mother’s help babysitting her son, she doesn’t know how she could have continued fishing.

“We’ll do whatever we have to do to make this family business run,” she said. “The lionfish are part of that.”

The life of a fishing family is still hard, of course. It always has been. For more than three decades, Gary Nichols has departed from the tiny commercial-fishing village of Conch Island on his 48-foot boat, the LifeForce. His working days can last up to 18 hours, and it’s the kind of work that turns young men old very quickly.

Years of enduring heat, exhaustion and the vicissitudes of an industry dependent on Mother Nature’s cooperation can debilitate even the most resilient worker as they hunt for their chosen catch. Last season was a notoriously bad year for the lobster harvest in the Florida Keys, forcing some lobster fishers to quit early.

But mention last season to Nichols and he grins from ear to ear like horse bettor who just won on a long shot at the Kentucky Derby.

My name is Erin Spencer and I'm on a mission to track local response to invasive lionfish in the Florida Keys.